No Fair Election In Honduras Under Military Occupation

As the Honduran election approaches this Sunday, let's be clear about the conditions under which it is taking place. Human rights abuses are rampant, freedom of speech is under attack, and the election process is in the hands of the very people who perpetrated the coup. Clearly, no free and fair election is possible under the repressive thumb of the military coup that has been in place for five months.

While the 23 nations of the Rio Group from Latin America and the Caribbean have condemned the election and announced they will not recognize its outcome, the Obama administration still insists it will recognize the results -- once again isolating the United States from those who are upholding democracy in the hemisphere.

President Obama should join the rest of the world and immediately declare the elections fraudulent and demand the immediate restoration of President Manuel Zelaya, the withdrawal of the Honduran military, and a delay of the election until three months after Zelaya has been full reinstated.

Imagine a "free and fair election" under the conditions in Honduras today (and imagine if this were taking place in the United States):

No free and fair election can take place under these circumstances. Only when the legitimate President of Honduras, Manuel Zelaya, has been fully restored to office for three months, only when the military has been pushed back into its barracks, and only when civil liberties are completely restored can an orderly transfer of power to a new administration take place. By persuading coup leader Roberto Micheletti to briefly step aside in the week before the election, the U.S. State Department has tried to whitewash the election at the last minute. But that doesn't change the fact that the Honduran military and the oligarchs, who perpetrated the coup and who have dictated the nation's politics for decades, are still brutally repressing the people of Honduras.

The vast majority of Hondurans aren't fooled. After five months of military repression, they know the difference between a fraudulent cover for the continuation of the coup regime, and a truly free and fair election under the rule of law. So does the European Union, the Organization of American States, and the Rio Group. They understand well the dangerous precedent the Honduran coup represents.

President Obama should refuse to recognize the results of the election and bring an end to the embarrassing isolation of the United States from the rest of the world. 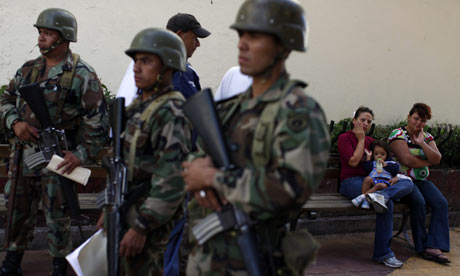 Thousands of soldiers have been deployed across Honduras to oversee a controversial election which will cement the overthrow of President Manuel Zelaya.

The de facto government has militarised the capital, Tegucigalpa, and other cities to deter pro-Zelaya protests and ensure that Central America's first coup since the end of the cold war prevails.

The authorities blanketed media with patriotic footage of army manouevres and football matches – Honduras recently qualified for the World Cup – to try to stir passion for what it termed an "electoral fiesta".

They hope the election of a new president – Zelaya, 57, is not on the ballot – will consign the toppled leftist to oblivion and pressure the international community to let the 28 June coup stand.

But apathy and resentment may keep turnout low, throwing into doubt whether the poll will resolve a five-month old crisis that has made Honduras a pariah state.

Security forces have suppressed dissent by beating and arresting hundreds of Zelaya supporters in recent weeks, leaving an edgy calm. A state of emergency has been declared for the vote and 5,000 army reservists mobilised.

The head of an Amnesty International delegation expressed concern that security forces had stockpiled 10,000 teargas canisters. "There's an environment of fear and intimidation in Honduras," said Amnesty's Javier Zuñiga. "We have seen an increased level of harassment against those who are seen as opposed to the de facto authorities."

Zelaya's supporters plan to boycott the election but, exhausted and cowed, cannot stop it. "The vote is a farce, a pantomime, but the coup has won," said Miguel Alonzo Macias, a leader of the "resistance" in Siguatepeque, outside the capital.

But Zelaya's foes are not jubilant. Honduras has paid dearly for turning the clock back to an era of military-led overthrows, curfews and repression.

Foreign aid and investment have evaporated, hitting jobs and relief efforts for the half of Honduras's 7 million population who live on less than $2 (£1.21) a day. The country is dangerously polarised between Zelaya's mainly poor, working-class base and the conservative elites and middle class who cheered his fall.

"It's been a tough few months but worth it," said Ricardo Cortes, a taxi driver in Tegucigalpa. "Mel was crazy for power; we had to get rid of him," he said, referring to Zelaya's nickname.

Zelaya, a wealthy logger elected in 2005, became an unlikely champion of the poor when he veered left and embraced Venezuela's President Hugo Chávez. The switch alienated congress, the army, the supreme court and his own Liberal party.

When he tried holding a non-binding referendum on changing the constitution they accused him of plotting to extend his rule – a charge he denied – and ousted him. Soldiers rousted the president in his pyjamas and bundled him into exile. Coup leaders calculated they could ride out the storm until Sunday's election.

Zelaya snuck back into Honduras in September and from the refuge of the Brazilian embassy called supporters on to the streets. But repression and limited popularity meant no wave of people power swept him back to the faux-colonial presidential palace, leaving him marooned in an embassy surrounded by troops.

"To a certain extent the coup leaders have won. Zelaya was ousted and has not returned to power," said Peter Hakim of the Inter-American Dialogue thinktank.

The president's plight has exposed regional faultlines and missteps. Chávez's call for Honduran revolt went unheeded. The Organisation of American States' attempt to mediate flopped. The US condemned the coup but then undermined a power-sharing proposal by saying it would recognise the elections even if Zelaya was not first restored.

"We just pray that this election will let us start over," said Carlos Mejia, a street vendor. "We need to move on."

The two main candidates are from the traditional ruling elite. Pofirio Lobo, 61, a wealthy rancher and congressman from the National party, is favoured to win. Elvin Santos, 46, is a businessman from Zelaya's Liberal party, which is badly split. In the hope of wiping the slate clean both have sidestepped mention of Zelaya, leaving him like Shakespeare's Banquo, a political ghost.

De facto president Roberto Micheletti is not a candidate. As the coup figurehead he has stepped down for a week to bolster the poll's credibility. He is due to return on 2 December and is expected to remain until handing over to the new president, on 27 January.

Whoever takes over will inherit a mess. The economy is slumping, Latin America has scorned the election's legitimacy and Zelaya supporters, defeated but defiant, are expected to push for a new constitution.

"Under the rock that has been lifted there is a lot of intense anger," said Julia Sweig of the Council on Foreign Relations thinktank. "This is a society that needs major reform."

Allowing the coup to stand sent a worrying signal to a region with fragile democracies and weak institutions, she said. "This sets a terrible precedent for other countries in the region."

HONDURANS IN WASHINGTON, DC TO PROTEST CONTROVERSIAL ELECTIONS IN HONDURAS

Hondurans in Washington, DC to protest controversial elections in Honduras
For release: November 27, 2009