A qualitative step forward for the organized struggle in Honduras

A qualitative step forward for the organized struggle in Honduras

A new challenge: taking over highways, ports and customs offices to bring the country to a halt and overthrow the dictatorship

“…Because a people disorganized becomes a mass that can be toyed with, but a people that organizes itself and fights for its values and for justice is a people that demands respect.”

After more than 90 days of resistance and struggle, the Honduran people have taken a qualitative step forward. As of last Tuesday, in addition to collective marches down the main streets of the cities, the protest actions have extended to towns, neighborhoods and residential districts. The protest actions and occupations of roads in towns, neighborhoods and residential districts are very important because:

1) they force the police and the military to use additional personnel, ammunitions, fuel and other logistical support and to mobilize in areas with which they are not very familiar, which leads to the forces getting worn out more quickly, having difficulty maintaining their supplies and potentially becoming trapped and isolated.

2) the people in the resistance are familiar with the towns, neighborhoods and residential districts and know the back roads and short cuts.

3) the struggle in these territories gives people a sense of membership and forces them to show up, take a stand and position themselves in opposition to those who until now have remained passive.

4) the mobilizations in towns and neighborhoods allow many people to join the movement who have been unable to go to the protests because they can not afford to take the bus or eat meals away from home, or because they are housewives and have to take care of their homes, elderly relatives, siblings or children. More than anything, many have to work a full workday and now they can join in on the actions that are taking place in their neighborhoods at night.

5) mobilizations in the neighborhoods, towns and residential districts require that people identify themselves with and organize logistically around the actions. They also force people to sit down and discuss the reasons for being in resistance, the scope of the changes that need to be made, to question corruption, the limitations of the current electoral circus and, especially, to propose a new nation, a new reality that is highly democratic and participatory, that goes beyond political parties and reduces inequities – a country more just and more our own.

6) the movement in towns and neighborhoods includes older people who have past experience in resistance, in farm worker, labor, and urban movements; it also extends a hand and gives a renewed sense of agency to the youth who are playing a decisive role in the street protests.

7) in addition, organizing in the neighborhoods brings the movement and the conflict closer to home. It breaks down the media’s portrayal and official stigma of us as just a few troublemakers engaging in acts of vandalism, allowing each one of us to identify with and recognize ourselves as the RESISTANCE. We are the RESISTANCE.

With the incorporation, organization and action of the towns, neighborhoods and districts there is no turning back. With this step, we are taking back the public spaces that we have lost due to indifference and the exclusionary pattern that proposes and imposes on us governance by the mediocre “Arab” bourgeoisie – the members of the wealthy and middle classes who intend to build walls and fences of police control and force us all take refuge in our homes and turn our backs on our neighbors.

Now it is time to take a new step and make the most of the richness and capacities of local organization, to strike a final blow against this repressive and brutal regime, against the big “Arab” and Honduran business owners who finance and support the coup, who have grown wealthy due to the exclusive and reactionary system under which we live. Against those who do not care about the crisis, the repression and the curfews, about the many people who have lost their jobs, who cannot leave home daily to earn the bread for their children to eat, about the thousands of small

and mid-sized businesses that are on the verge of failing because of the collapse of consumer markets.

We have to block land transport and the ports through hundreds and thousands of small but effective takeovers of roads in every corner of the country. In this way, we will incorporate every person in every small town close to the highways, customs offices and ports. Short takeovers of half an hour, in which we stop traffic with 100 people, burn tires, build barricades with sticks and any material we have at hand, put ground glass and other materials to “puncture tires” of the cars that are passing. We stay there for half an hour and DO NOT CONFRONT the police and the military. I REPEAT: WE WILL NOT CONFRONT THE POLICE AND THE MILITARY.

We ask the neighbors of the nearest community to warn us before they arrive. We will leave before they arrive, using the side streets, hills and paths we know so that the police and military will exhaust themselves trying to catch us, putting out tire fires, removing rubble and clearing glass and nails off the highway. And the town should cut them off; no one should sell them food. We will close the local stores and the businesses; we will become the crafty ones. We will immediately coordinate to set up a new roadblock at another point many kilometers down the highway from ours so that they run off to the next point being occupied on the highway; that is how it will go on all day long.

At the same time, we will continue with occupations and disturbances in every neighborhood and district in the city so that they many troops must be kept in Tegucigalpa and other cities. But we have to organize ourselves and create a telephone or radio information network, transmitting in code, to send warnings about how many troops are moving from one point to another. We will drive the police and the military crazy and, more importantly, we will not allow the companies backing the coup to move their products on the highways, to get their products through customs or to export them. No African palm oil, bananas, plantains, coffee, sugar, shrimp, melons or minerals – no product, piece of clothing, cloth, sock or undergarment will be exported from the factories. And this is just the beginning; we can stop trucks, seize them and sabotage the customs offices, ports and airports.

up. And then what purpose will the coup government serve? And these businessmen and women, who are the ones propping up the de facto government, and the ones paying off the criminal colonels and generals, will have to back up before the power of the people to make way for the reinstatement of the Zelaya administration, for democracy for all and for our National Constitutional Assembly.

So, comrades, let’s take over the highways, the customs offices and the ports, along with the neighborhoods, districts and towns, to bring the country to a halt.

We call on our brothers and sisters in Guatemala, El Salvador and Nicaragua to coordinate with our people to take over customs offices and carry out protests in the major cities.

Delfina Bermúdez is a Honduran teacher in resistance. 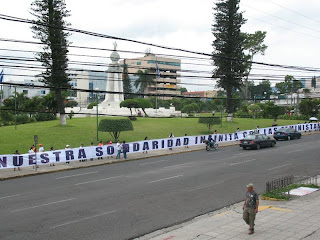 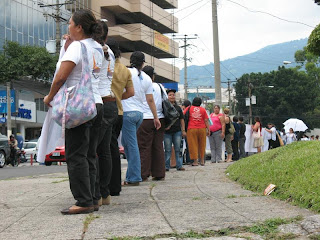 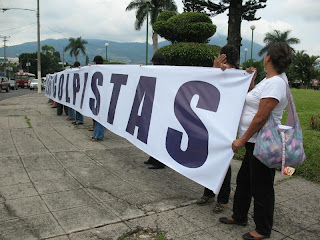 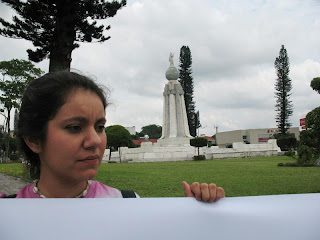 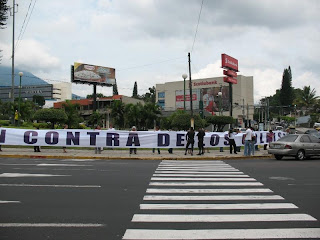 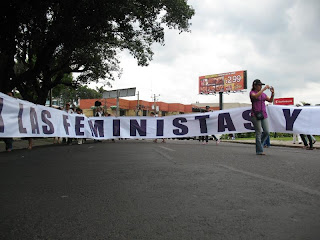 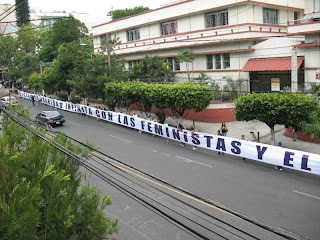 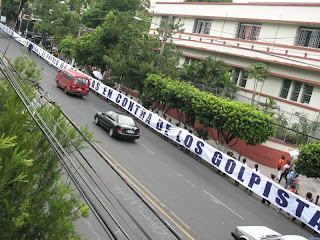 Washington, D.C. - The Honduran de facto regime suspended constitutional guarantees to civil liberties, including freedom of assembly and freedom of the press, for 45 days on the eve of mass protests planned to mark the three-month anniversary since the coup d'etat against President Manuel Zelaya took place. The regime has also shut down Radio Globo, a prominent independent media outlet that has covered anti-coup activities and that reportedly has a journalist inside the Brazilian embassy where Zelaya is staying, and TV station Channel 36.

"After 90 days and not one word from the Obama administration on the abuses in Honduras, it looks an awful lot like a tacit endorsement of the repression by the U.S. government," said Mark Weisbrot, Co-Director of the Center for Economic and Policy Research.

"Certainly the de facto regime must have gotten the idea that they have a blank check from the Obama administration for any crimes that they commit. That's one reason they're doing this."

The suspension of civil liberties would last at least until just a few weeks before the scheduled November 29 elections, and is likely to further call into question the elections' legitimacy.

The regime also issued an ultimatum to Brazil over the weekend, warning the Brazilian government that it has 10 days to decide what to do about Zelaya, and a regime spokesperson warned that since Brazil broke off diplomatic relations with the coup government, it could remove the flag and shield from the Brazilian embassy, making it a "private office." Brazilian President Lula da Silva rejected the threats, saying that his government "doesn't accept ultimatums from coup-plotters."

In the three months since President Manuel Zelaya was overthrown, the coup regime has committed numerous human right abuses, including thousands of arrests and detentions, beatings, and the closing down of independent media. This has been documented, reported, and denounced by major human rights organizations throughout the world: Amnesty International, the Center for Justice and International Law, Human Rights Watch, the Inter American Commission on Human Rights and others. Some opponents of the regime have also been killed, tortured, and raped, and Honduran human rights groups have accused the government of responsibility for these crimes.

The Obama administration has not commented on any of these crimes or human rights violations.

Also, on Friday, the UN Security Council passed a resolution that "condemned acts of intimidation against the Brazilian Embassy and called upon the de facto government of Honduras to cease harassing the Brazilian Embassy and to provide all necessary utilities and services including water, electricity, food and continuity of communications. Respect and protection of the inviolability of diplomatic premises is a universally accepted principle of international relations," according to U.S. Ambassador to the United Nations Susan Rice.

This was in response to the Honduran regime's violations of international law in its attacks on the Brazilian embassy with tear gas and other chemicals, cutting off food, water, and electricity, and other abuses.

The U.S. government has not criticized the de facto regime for its violations of international law with respect to the Brazilian embassy.

The Center for Economic and Policy Research is an independent, nonpartisan think tank that was established to promote democratic debate on the most important economic and social issues that affect people's lives.