Indigenous Organization COPINH: We march against the developers, planners, executors and inheritors of the Coup d'Etat 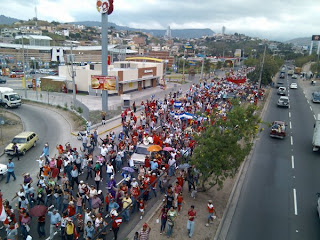 1. From the different Lenca communities and from all the corners of our country, we are mobilizing to participate in the great march convened by the National Front of Popular Resistance against the coup d'etat.

2. We mobilize to reject the regime of Porfirio Lobo Sosa, developer, planner, executor and inheritor of the coup d'etat, with which once again the oligarchy has violated the Constitution of the Republic.

3. We mobilize to denounce the impunity enjoyed in our country by the oligarchic, political, police and military leadership.

4. We mobilize to demand the punishing of the assassins of our sisters and brothers who lost their lives defending the right to live in democracy.

5. We mobilize to defend our right to free expression.

6. We mobilize to denounce the plan for the country of the oligarchy and its aides, given that it is nothing more than a plan of dispossession of natural resources and exploitation of the Honduran people.

7. We mobilize to denounce the Organization of American States, the United Nations, the European Union, entities that were and are complacent with the coup-makers and that once again demonstrated that their reason for existence is to serve the powerful.

8. We mobilize to make a call to create, from the resistance, a broad front as a space for electoral participation of the Honduran people that allows us to develop a new type of political instrument and to move away from the temptation to be used by the parties of the oligarchy who were part of the coup d'etat.

9. We mobilize to move forward the struggle for a democratic and grassroots National Constitutional Assembly, to have a new political constitution that allows for the re-founding of our country.

With the ancestral force of Lempira, Iselaca, Mota and Etempica we raise our voices full of life, dignity, justice, freedom and peace.

Christians in Resistance in Honduras

The delegation met with members of a coalition of different Christian groups against the coup including the Christian Popular Movement the Network of Pastors in Resistance, Agape, the Ecumenical Human Rights Observation, and others.

They told us that the church hierarchies, both Catholic and Protestant were clearly for the coup. In the base communities of the protestant churches, there was a lot of confusion. There was a sector that did not accept support for the coup and a sector that followed the leaders blindly. Some of the people who did not accept supporting the coup, while not a part of any hierarchies, are leaders of the base communities.

“So under this situation of the coup we took the brave and risky position to be on the side of justice, on the side of persecuted, suffering people, and denounce those who used weapons against the people with the blessing of the church hierarchies. Those of us here represent Christians who have a clear theological position about what is happening in Honduras.”

“The Popular Christian Movement is ecumenical and includes Protestants, Catholics, and those who are not of any particular faith. Our fundamental theology is the theology of liberation.”

As Christians we are on the side of human rights for those who have been persecuted by the de facto government.

We are few but with Jesus we are many.”

The Network of Pastors in Resistance is composed of pastors of different denominations with the wish to serve the community with social consciousness. Their most important ministry is the medical brigades. “That has helped us see that this country needs structural change and that the church has a responsibility to obtain these changes.” After the coup, the group issued a communiqué that was heard on the radio by others who then joined the movement.

The Church hierarchies accuse the resistance Christians of getting money from Hugo Chavez. “The only money that we receive is money that God sends through our members. We are independent because we haven't sold our conscience to anyone.”

The Ecumenical Observation (Observatory) of Human Rights is part of a larger project. In August, the World Council of Churches and the Latin American Council of Churches came to Honduras and they recommended a broader commission to document the situation and cases of human rights violations. In Honduras, there is a national board of the Latin American Council made up of 5 churches, the historic churches such as the Lutheran, Episcopal, Methodist, reformed church, Mennonites and others. And at the Latin American level it is 180 churches or so of various denominations.

The project of the Observatory is to get information out to the rest of Latin America and Europe and to develop campaigns on human rights cases. Part of the human rights work also included not recognizing the elections on November 29th and demanding the restitution of Zelaya . The project visits police facilities and has helped liberate detained persons. The organization ahs also visited the families of the killed, detained and disappeared and offers help to those who have to leave the country.

“We suffer a lot, this is hard work. We don’t know if the police or military will assassinate or repress us. We have had the great satisfaction to feel free when we are able to help someone.”

We asked what has been the response of the church to their organizations.

The Agape Church pastor answered that Agape is a member of the Cofraternity of Churches.

“We have been strongly questioned within this organization and there is the idea that we receive money to support the resistance. In this Cofraternity, Agape and the Network of Pastors are considered subversive. In some radio stations, they say that we are supporting delinquents. The response of the believers who belong to the churched varies: there are 3 responses, “I don’t want to hear anything, I want to pray in the temple.” A smaller group has said, “good for the coup” because Chavez (Satan) will come and bring communism so then the coup is from God”. A third group, which is our group, says we want to reject the coup. And we have raised a prophetic voice in favor of the poor and the most needy. “

The pastors said that there has also been pressure from the U.S. religious leadership on Honduran churches not to oppose the coup.

There has also been repression against religious figures in resistance. “Father Tamayo had his citizenship nullified by the golpistas and he was expelled from Honduras. (Note: Father Tamayo is a prominent resistance priest who was originally from El Salvador and became a Honduran citizen)

“We want to establish relationships with churches outside of Honduras to assist the resistance from a perspective of faith and to support our projects of theological meetings to develop faith committed to the people.