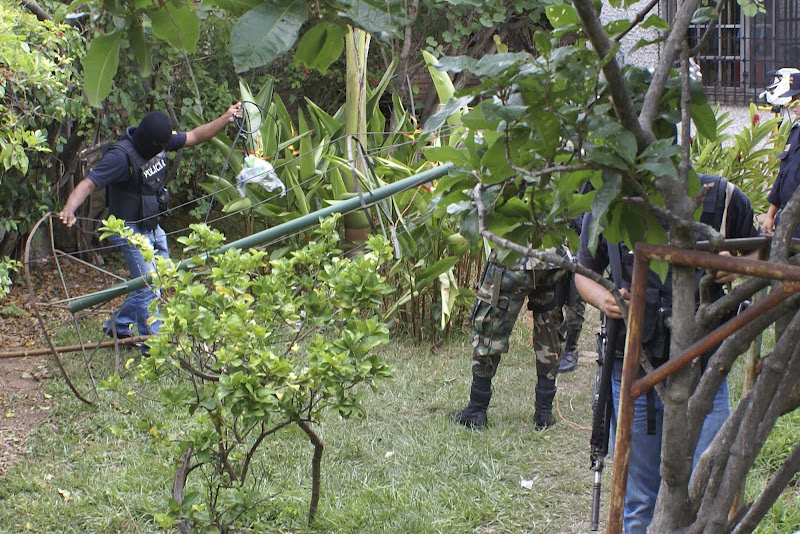 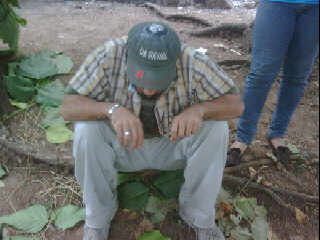 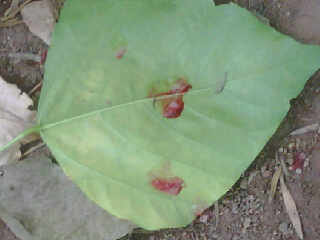 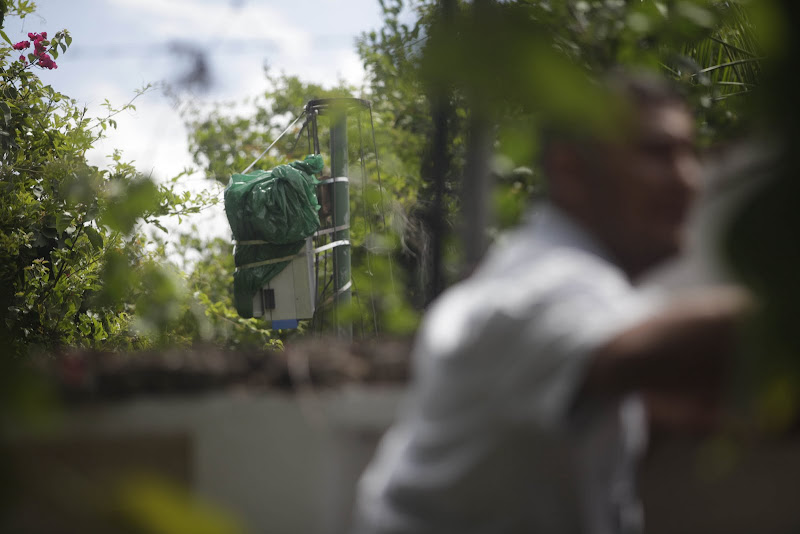 Zelaya's Return: How Much Repression Will Hillary Clinton Support in Honduras?

Now that President Zelaya has returned to Honduras, the coup government – after first denying that he was there – has unleashed a wave of repression to prevent people from gathering support for their elected president. This is how U.S. Secretary of State Hillary Clinton described the first phase of this new repression last night in a press conference:

“I think that the government imposed a curfew, we just learned, to try to get people off the streets so that there couldn't be unforeseen developments.”

But the developments that this dictatorship is trying to repress are very much foreseen. A completely peaceful crowd of thousands surrounded the Brazilian embassy in Tegucigalpa, where Zelaya has taken refuge, to greet their president. The military then used the curfew as an excuse to tear-gas, beat, and arrest the crowd until there was nothing left. There are reports of scores wounded and three dead. The dictatorship has cut off electricity and water to the embassy, and cut electricity to what little is left of the independent media, as well as some neighborhoods. This is how the dictatorship has been operating. It has a very brutal but simple strategy.

The strategy goes like this: they control the national media, which has been deployed to convince about 30-40 percent of the population that their elected President is an agent of a foreign government and seeks to turn the country into a socialist prison. However, that still leaves the majority who have managed to find access to other information.

The strategy for dealing with them has been to try to render them powerless: through thousands of arrests, beatings, and even some selective killings. This has been documented, reported, and denounced by major human rights organizations throughout the world: Amnesty International, the Center for Justice and International Law, Human Rights Watch, the Inter American Commission on Human Rights and others.

One important actor, the only major country to maintain an ambassador in Honduras throughout the dictatorship, has maintained a deafening silence about this repression: that is the United States government. The Obama administration has not uttered one word about the massive human rights violations in Honduras. This silence by itself tells you all that you need to know about what this administration has really been trying to accomplish in the 87 days since the Honduran military squelched democracy. The Obama team understands exactly how the coup government is maintaining its grip on power through violence and repression. And President Obama, along with his Secretary of State, has shown no intention to undermine this strategy.

In fact, President Zelaya has been to Washington six times since he was overthrown, but not once did he get a meeting with President Obama. Why is that? Most likely because Obama does not want to send the “wrong” signal to the dictatorship, i.e. that the lip service that he has paid to Zelaya’s restoration should be taken seriously.

These signals are important because the Honduran dictatorship is digging in its heels on the bet that they don’t have to take any pressure from Washington seriously. They have billions of dollars of assets in the United States, which could be frozen or seized. But the dictatorship, for now, trusts that the Obama team is not going to do anything to hurt their allies.

The head of the Organization of American States’ Inter-American Human Rights Commission, Luz Mejias, had a different view of the dictatorship’s curfew from that of Hillary Clinton. She called it “a clear violation of human rights and legal norms” and said that those who ordered these measures should be charged under international criminal law.

What possible excuse can the military have for breaking up this peaceful gathering, or can Ms. Clinton have for supporting the army’s violence? There was no way that this crowd was a threat to the Brazilian embassy – quite the contrary, if anything it was protecting the embassy. That is one reason why the military attacked the crowd.

On August 11, sixteen members of the U.S. Congress sent a letter to President Obama urging him to “publicly denounce the use of violence and repression of peaceful protestors, the murder of peaceful political organizers and all forms of censorship and intimidation directed at media outlets.”

They are still waiting for an answer.

Some might recall what happened to President Bill Clinton when his administration sent mixed signals to the dictatorship in Haiti in 1994. President Clinton had called for the dictator Raul Cedras to step down, so that the democratically elected President Jean-Bertrand Aristide could be restored. But Cedras was convinced – partly because of contradictory statements from administration officials like Brian Latell of the CIA – that Clinton was not serious. Even after Jimmy Carter, Colin Powell, and then Senator Sam Nunn were sent to Haiti to try to persuade Cedras to leave before a promised U.S. invasion – the dictator still did not believe it. In September of 1994 President Clinton sent 20,000 troops to topple the dictatorship and restore the elected president (who ironically was overthrown again in 2004, in a U.S.-instigated coup).

By now, the coup government in Honduras has even less reason than the 1994 Haitian dictatorship to believe that the Obama team will do anything serious to remove them from power.

What a horrible, ugly message the Obama administration is sending to the democracies of Latin America, and to people that aspire to democracy everywhere.

Mark Weisbrot is an economist and co-director of the Center for Economic and Policy Research. He received his Ph.D. in economics from the University of Michigan. He is co-author, with Dean Baker, of Social Security: The Phony Crisis (University of Chicago Press, 2000), and has written numerous research papers on economic policy. He is also president of Just Foreign Policy.

This column was originally published by The Guardian. 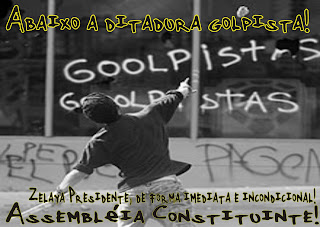 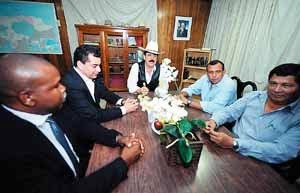 Re: Honduras Solidarity Committee demands Restitution of Democracy in Honduras and Reinstatement of President Zelaya

Phoenix, AZ – The Honduras Solidarity Committee of Arizona will participate today in an International Action of Solidarity with the people of Honduras who are mobilized across the country in support of President Miguel Zelaya. President Zelaya returned to Honduras on Tuesday in spite of the de facto government issuance of an order of arrest, and has been received in the Brazilian Embassy in Tegulcigalpa.

In the tense situation, the Honduras Solidarity Committee of Phoenix calls upon all peoples of good conscience to express support for a return to democracy and peaceful resolution of the crisis brought upon the people of Honduras by a military coup initiated on June 28th with the support of the US based School of the Americas based in Ft. Benning Georgia.

The action in Phoenix , in protest and denunciation of the military coup will deliver a message to US President Obama and members of the US congress demanding an immediate end of military aid to the illegal regime of the defacto government led by Roberto Micheletti and challenging the Obama administration to speak unambiguously, and act decisively, by joining with the other nations of the hemisphere in restoring the constitutional government of President Mel Zelaya.

Recalling the period in history from 1865-1867, when the US government applied diplomatic pressure in favor of Mexico’s legitimate president Benito Juarez and against the illegal right wing usurpers of power, the battle for constitutional government in Honduras takes place during new era of democratization across the hemisphere. The developments in the central part of the continent also are framed by the constitutional recognition for the first time of Indigenous Peoples, as declared by the UN Declaration on the Rights of Indigenous Peoples adopted by the UN General Assembly on September 13th, 2007.

Calling for investigation of the role of the US based School of the Americas at Ft. Benning Georgia in the military coup in Honduras, the Honduras Solidarity Committee of Arizona is also calling upon congressional support for House Resolution 630 before the Committee on Foreign Affairs, demanding the reinstatement of President Zelaya.

Condemning the June 28, 2009, coup d'etat in Honduras, calling for the reinstatement of President Jose Manuel Zelaya Rosales, and for other purposes.

IN THE HOUSE OF REPRESENTATIVES

Condemning the June 28, 2009, coup d'etat in Honduras, calling for the reinstatement of President Jose Manuel Zelaya Rosales, and for other purposes.

Whereas Jose Manuel Zelaya Rosales was elected President of Honduras in November 2005 in elections that were deemed free and fair by international observers;

Whereas President Zelaya and other political actors in Honduras became embroiled in a political dispute over whether to hold a non-binding referendum asking Honduran voters whether they wanted a constituent assembly to be established to amend the Constitution;

Whereas, on June 28, 2009, the day that the non-binding referendum was to take place, Honduran military forces stormed President Zelaya's residence, apprehended him, sent him out of the country, and seized the materials for the referendum;

Whereas the Honduran Congress named Roberto Micheletti, the head of the Congress, as President and subsequently suspended a number of constitutional rights, including the freedom of association and of movement;

Whereas the Inter-American Commission on Human Rights has expressed its concerns regarding human rights abuses by the de facto Micheletti government, including the arbitrary detention of Zelaya supporters;

Whereas the Organization of American States (OAS), the United Nations, and the European Union, representing governments from across the political spectrum, have condemned the coup d'etat, refused to recognize the de facto Micheletti government, and demanded the unconditional return of President Zelaya to office;

Whereas, on July 1, 2009, the OAS voted unanimously to suspend Honduras from participation in the OAS unless President Zelaya was returned to office within three days;

Whereas, on July 4, 2009, the OAS unanimously voted to suspend Honduras;

Whereas the Obama Administration has condemned President Zelaya's removal, supported the OAS resolutions regarding Honduras, and demanded that he be returned to office;

Whereas the World Bank and Inter-American Development Bank have suspended aid and loans to Honduras;

Whereas national elections are scheduled in Honduras for November 29, 2009;

Whereas President Zelaya has said that he will only serve until his term ends in January 2010;

Whereas it is critical for the stability of Honduras that the November 2009 elections be free, fair, and transparent; and

Whereas U.S. Secretary of State Hillary Rodham Clinton announced on July 7, 2009, that Costa Rican President Oscar Arias would seek to negotiate a solution to the crisis, and President Zelaya and the de facto Micheletti government have agreed to the mediation of President Arias: Now, therefore, be it

Resolved, That the House of Representatives--

(1) condemns the June 28, 2009, coup d'etat in Honduras and refuses to recognize the de facto Micheletti government installed by that coup d'etat;

(2) calls on the Obama Administration to continue to refuse to recognize the de facto Micheletti government;

(3) calls for the reinstatement of President Zelaya as President of Honduras;

(4) urges the Obama Administration to suspend nonhumanitarian assistance to the de facto Micheletti government as required by United States law as it deems necessary to compel the return of President Zelaya to office;

(5) calls for extensive international observation of the November 2009 elections once President Zelaya is returned to office to ensure that his successor is elected freely, fairly, and transparently; and

(6) welcomes the mediation of Costa Rican President Oscar Arias and encourages the Obama Administration to provide any assistance President Arias requests in his efforts.