National Congress abolishes the Teachers' Statute and of other professions

This was all predictable and foreseeable, especially considering what has happened in the last days (see previous post):
The approval has a seal on it  against the Teachers' Union
Red Morazánica de Información

Tegucigalpa October 27, 2010.  The National Congress abolished different statutes as a part of a strategy against the social conquests of the people, which started with the coup d'état against Constitutional President Manuel Zelaya Rosales.
The abrogation will affect the teacher sector the most, whom the oligarchy intends to take away their achievements since before the coup d'état with the purpose of privatizing education and destroying the biggest trade union in the country.
The approval of the decree, which repeals the salary clause for minimum wage, is also apparently due to pressure by the International Monetary Fund FMI.
The abrogation contradicts in a clear way article 95 of the Teachers' Statute, which literally states: The rights recognized by this Law will not be diminished, distorted, nor ignored and all provisions in this sense will be null ipso jure. The teacher personnel on duty as this Statute comes into effect, will conserve the rights acquired through the previous Law of Personnel and Wage Scale of  Teachers as much as it favors them.
Last Sunday, the president of the Teachers' Union of Middle School Education (Copemh), Jaime Rodríguez, denounced that the head of the regime, Porfirio Lobo, "seeks to blame the Teachers' Statute for the disorder in education and intends to eliminate articule 49", of that same law.
“Porfirio Lobo does not keep his word , the act [agreement] said that the body of teachers and the government express their total support to the executive decree [statute], but now he suddenly says that he will not comply with article 49", when article 95 [of that Statute] says that rights of teachers can't be reduced", questioned Rodríguez in this moment.
FNRP calls for demonstrations. The decree seeks to divide the front.
The National Front of Popular Resistance, FNRP,  called for demonstrations combined with  the teachers' sector, who already called out  all teachers to mobilize in the capital city.
Lawyer Rasel Tomé, leader of the FNRP, denounced that the approval of the legislative decree does not only aim to abrogate the statutes, but also aims directly to divide the National Front of Resistance, when intending to cause conflict between the teachers' sector with the workers' sector agglutinated in the political organization.
Why does the Congress "not touch anything from the thermal energy companies or fast food companies", the politician of the Resistance asked himself. Tome argued that from Congress, attacks are directed at the people, but not at the big companies which are protected with special laws that puts them above the population.
The approval of the decree had opposition by the parliamentary collective of Unificación Democrática (UD), who via Marvin Ponce and the head of the legislative caucus, Sergio Castellanos, who warned Congress about the negative results of such law.
This new post-coup action has as backdrop the failure to comply with the Law of Minimum Wage, which states that it must be approved during the month of January each year, or in case of defect the Law establishes its retroactivity starting from the first month of the year.
Lobo has refused to establish the new minimum wage in order to please the private sector of the country which proposes a new salary raise until the next five years.
The Pinu Social Democratic Party (PINU-SD), the National Party(PN), the Christian Democrats DC, and a part of the Liberal Party PL supported the abrogation of the statutes.
Source: http://www.resistenciahonduras.net - elquinceavopaso.blogspot.com
Publicado por Honduras en lucha! en 0:55 No hay comentarios: 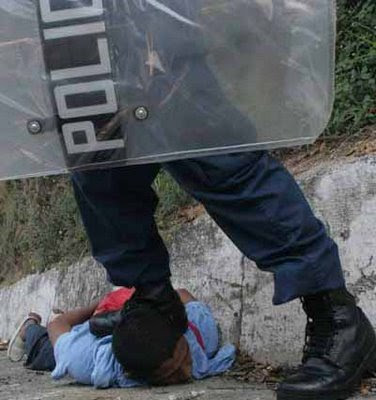