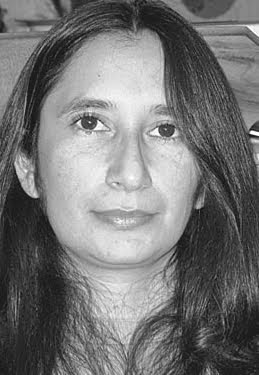 WRITER REBECA BECERRA
Testimony of new harassment against me and my family.
FIRST: During the last 5 days I'm being watched again in my apartment by a man who stays at night in the rear of the building, this man comes in late at night, sometimes until 12:00 pm. or at 1:00 am. On March 10 I went at first normally to leave my 7 year-old daughter Camilla to the bus that takes her to school, then to leave my 17 year-old daughter Michelle, at the National Conservatory of Music when this guy came abruptly from between some bushes behind us. He followed us a few feet afterwards until I stopped at a busy corner where vehicles pass for him to stop, the guy walked faster, I did not take my eyes off his face to supply him evidence that I was not afraid, he quickened his pace and went up the street leading to the park of La Leona and I kept him on sight until he was around the corner, then my daughter and I walked through the path that leads up the hill to get to the Conservatory Lempira.My daughter got very nervous when this man of medium height, dark clear skin, military-style hair cut, jeans, and a blue-gray jacketbag, sneakers and a backpack jumped behind us.
Generally for safety considerations I change my route but who can assure security when they know what I do daily. Today March 11, the individual did not appear.
The suspicion that we were under surveillance for several days was verified on the 9th, plus 3 days ago a neighbor fired two shots into the vacant lot, this neighbor did the same when I was being watched the first time after the coup.
I fear for the safety of my children and myself, I can not keep quiet, this makes it impossible to work in peace because I also have to keep working and bring my daughters, take care of them, while of course always watching for my safety.

SECOND: On March 6 I went out to enjoy a dance performance at the Teatro Nacional Manuel Bonilla accompanied by my underage daughters, always taking as many safety measures as possible, returning at around 9:00 pm I took a taxi near the theater and when we turned to take the road towards the main park, I saw before reaching the corner of a street a parked motorcycle with a man, then I saw that there was another guy with a gun, he climbed onto the motorcycle and followed the taxi in which we were, my daughter Michelle who could see everything was nervous, I told her to calm down but to stay alert. I moved to the right window, then my youngest daughter in the middle and Michelle in the left window, I was determined to throw my kids out the door if something happened. When the motorcycle reached us, I got nervous, it stopped in front of my window a few seconds since the car started once again, the guy who had the gun loaded it and turned quickly to see me, I was afraid he'd shoot, but then he drove in front of the car in an X form and then disappeared. My fear was that they were waiting near the building where I live, so I took the safety to get off quickly to open the gate and then take out my daughters. The taxi driver was so absurdly indifferent that he kept calling in his cell phone.

THIRD: That I keep receiving seguridadweb@bolivariano.com mailing address to my personal email which asks me to update my bank account number and Bank FICOHSA LAFISE in which I have no account whatsoever.
These facts narrated have happened after I was called by the Special Prosecutor for Human Rights to bear witness to the harassment I was subjected to during the coup. This Office has informed me of the IACHR's precautionary measures extended for me, because of fear for my safety and personal integrity.The Prosecutor's Office assigned the Attorney Carlos Flores to make the investigation of my case and the events that occurred to me after the coup on 28 June 2009.
I add to this testimony I want to live in peace in my country and work normally for the support of my daughters, that if my only crime is being in favor of justice, honesty, against impunity, many and many of us are in danger because we are obstacles to the corrupt, those who want to govern this country however they want, forgetting about the needs of the majority of the Honduran people, claiming to solve their social problems, many of which are already part of our sad history.
I attest my testimony to the twelfth day of March two thousand and ten asking the human rights organizations to make appropriate legal action to denounce these outrages towards me and my family.
REBECA BECERRA
Fuente: elquinceavopaso.blogspot.com - honduraselogoali.blogspot.com
,
Publicado por Honduras en lucha! en 14:28