"Nobody can silence us" - Garífuna radio station under attack again 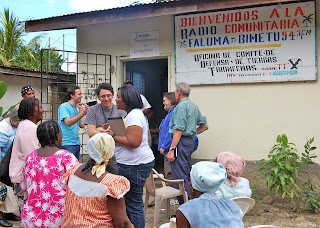 La Voz de los de Abajo has just begun an 8-day human rights delegation to Honduras, our fourth since the coup d'etat of June 28th, 2009. Our delegation started out with a visit to Triunfo de la Cruz, a Garífuna community that is home to the first Garífuna people's radio station, which has been under constant threat and attack since the coup d'etat. The situation of the radio has taken a turn for the worse and the community leaders urge international attention and denunciation.
"Nobody can silence us" - Garífuna radio station and community leader threatened
A year ago the first Garífuna community radio station Faluma Bimetu in Triunfo de la Cruz, known for its its tireless work giving voice to the community struggles of the Garífuna and the rest of the resistance in Honduras, was burnt down. One month later, the community had rebuilt it and put in a transmitter with twice the power it had before that attack. Now it has been off the air again because of threats against it and its director, Fraternal Black Organization of Honduras (OFRANEH) leader Alfredo Lopez.

Lopez, who has been threatened many times, was maliciously accused of making th

"They can't silence us. If they haven't been able to get rid of us in two hundred years they won't be able to get rid of us now," says Alfredo. Triunfo de la Cruz has a long history of struggle stemming back to the forceful displacement of the Garífuna community from Tela in the 1800s. In recent decades Triunfo de la Cruz, like Garífuna communities all along the north coast of Honduras, has been in a battle for survival in the midst of threats from tourist mega-projects, large land owners seeking more land to cultivate African Palm, transnational companies and narco-traffickers. Before he was kidnapped by the army and flown out of the country by the army, President Mel Zelaya had signed several agreements with the Garífuna communities to begin resolving some of their land claims. Though there had been an ongoing struggle to see the accords come to fruition, the coup dramatically worsened the situation. Recognizing that the coup was carried out by the same oligarchs that the community had been struggling against for generations, the Garífuna communities were amongst the first to pour into the streets to join and give energy to the resistance movement. Radio stations like Faluma Bimetu, which is now one of four Garífuna radio stations supported by OFRANEH along the north coast, played a fundamental role in spreading news of what was really taking place in the midst of a media blackout throughout the country. The programming, which includes news, commentary, music and more, was so important to the surrounding communities that they quickly and energetically launched a successful campaign to get it back on the air when it was burned down last January. But the re-launching of the radio with even more coverage than before has further angered the powerful interests that wish to silence the Garífuna resistance and take over their lands. Taking advantage of the post-coup political climate, narco-traffickers have gained tremendous influence in the local municipality and bought off several community members to create a parallel community council to rubber stamp land concessions and undermine the existing community council that has coordinated resistance for generations. Tension has grown in the build-up to the February elections of the legitimate community council, which the oligarchs and narco-traffickers desperately want to block. To this end, they blamed a recent shooting at the house associated with narco-traffickers on Alfredo López and threatened to burn down the radio station. 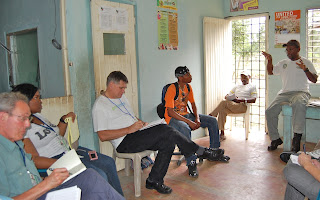 Though the charges have been dismissed as lacking any evidence whatsoever by the Honduran courts, the atmosphere remains extremely tense. The radio station team has carried out a survey of the community to assure they are willing to defend the radio station in the build-up to the elections with all the risks that this implies. Because of the overwhelmingly positive response, they intend to open the station in the near future, possibly as soon as Monday the 23rd.

In the meantime, OFRANEH has filed a legal complaint before the Inter-American Commission on Human Rights about the situation and are urgently asking for support to make the gravity of the situation known and demand that the commission take immediate measures to ensure the safety of Alfredo López and the other members of the Faluma Bimetu radio station and the Triunfo de la Cruz community. The contact phone number is 202-458-6002.
Fuente: hondurasresists.blogspot.com
Publicado por Honduras en lucha! en 0:40